THE WOLF CUT IS A THING 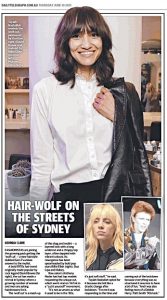 FASHIONISTAS are joining the growing pack getting the ‘wolf cut’ – a new hairstyle dubbed Gen Z’s unisex answer to the mullet.

A bold 1970’s hair trend originally made popular by rock legend David Bowie (far right), the cut has made a revival in Sydney where a growing number of women and men are asking hairdressers for it.

The ‘wolf cut’ is a mash-up of the shag and mullet – a layered look with a long undercut and choppy top layer, often dappled with vibrant colours. Its resurgence has been spearheaded by bold pop stars Billie Eilish (right), Dua Lupa and Halsey.

Raw salon’s Anthony Nader has had top models requesting the unique cut, which went viral on Tik Tok in a “cut it yourself” movement. “It’s not as severe as what it used to be in the ’80s, it’s just soft stuff” he said.

Taylah Hasballah opted for it because she felt like a drastic change after lockdown. “For me it was responding to the time and coming out of the lockdown because everything was so structured it was nice to have a bit of fun. “And I was also feeling more of a Debbie Harry, Patti Smith ‘90s look.”